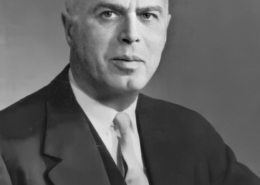 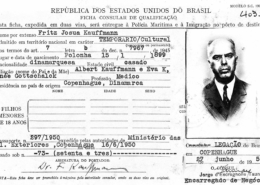 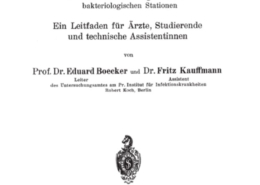 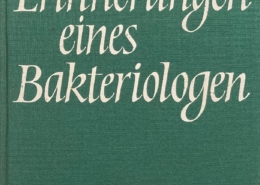 Fritz Kauffmann (1899-1978) came from Preussisch Stargard (near Danzig), which at that time belonged to the German province of West Prussia. After graduating from high school in 1917, he was called up for military service. From 1919 to 1922 he studied medicine in Greifswald, Munich and Hamburg. In Hamburg he passed the medical state examination and wrote his doctoral thesis on a case of paroxysmal paralysis [recurrent muscular paralysis] under Max Nonne (1861–1959), the head of the neurological clinic.

At the beginning of 1923, Kauffmann began working at the Robert Koch Institute (RKI) – first as a medical trainee, then as an unpaid volunteer. In December 1924, he was hired as a non-scheduled assistant, and in October 1928, he was promoted to scheduled assistant. During his time at the RKI, he worked in various departments, including the Bacteriological Investigation Office, the Epidemic Department and the State Vaccination Institute. His main focus was on research into intestinal bacteria. Together with Eduard Boecker (1886–1953), the head of the Investigation Office, he published the book “Bacteriological Diagnostics” in 1931, which was conceived as a “guide for doctors, students and technical assistants”. From the end of 1932, Kauffmann was recovering in Switzerland from tuberculosis, which he had apparently contracted in the laboratory at the RKI.

After the National Socialists took power in Germany and the Jewish employees at the RKI were dismissed, Fritz Kauffmann did not return to Germany. Together with his wife Hertha (née Ramann), whom he had married in Berlin in January 1932, he emigrated to Denmark, where he continued his research at the State Serum Institute in Copenhagen. There he expanded research into pneumococcal serology and, based on preliminary work by the British bacteriologist Philip Bruce White (1891–1949), developed a system for classifying salmonellae on a serological basis (“Kauffmann-White scheme”). In October 1943, Kauffmann had to flee to Sweden as a result of the German occupation of Denmark; after the end of the Second World War, he spent a year in the USA as a Rockefeller Foundation fellow. After returning to the State Serum Institute in Copenhagen, he headed the International Salmonella and Escherichia Centre sponsored by the World Health Organisation for many years.

Among the many awards Fritz Kauffmann received were the Aronson Prize (1958) and the Paul Ehrlich and Ludwig Darmstaedter Prize (1964). In the spirit of compensation, he was appointed professor with retrospective effect as well as honorary member of the RKI in 1966. Kauffmann, who had been a Danish citizen since 1939, died in Copenhagen a few months before his 80th birthday. In obituaries, he was honoured as “one of the greats of world bacteriology” as well as “primus mundi of salmonella research”. The most important prize in Danish microbiology still bears his name.