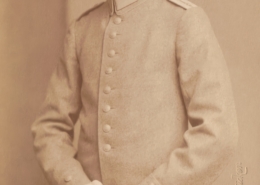 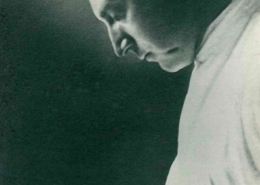 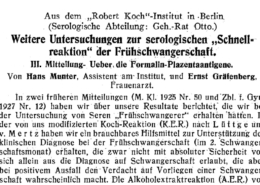 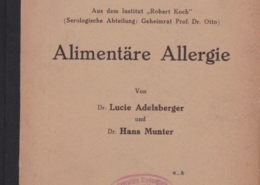 Hans Munter (1895-1935) was the youngest of three children of the Berlin businessman Siegfried Munter and his wife Valeska (née Cohn). After passing his advanced school-leaving certificate at Easter 1913, he began studying medicine at the Friedrich Wilhelm University in Berlin. He worked in the medical service for the first two years of the First World War and in February 1918 he passed his state examination in medicine. At the end of February 1919 he was granted his license to practise medicine. In March 1919 he submitted his doctoral thesis entitled “On Aetiology and Pathological Anatomy of Haemorrhagic Diatheses” [abnormally increased bleeding tendency].

After Hans Munter had initially worked as a scheduled assistant in the department for internal medicine of the Auguste Viktoria Hospital in Berlin-Schöneberg, on 1 September 1920 he joined the Robert Koch Institute (RKI). Within no time he was granted a scheduled post as assistant. In his first few years there, working in the RKI’s Serology department under Richard Otto (1872–1952), Munter researched and published his findings on various topics, including bacteriophagy, experimental typhus, blood groups, antibody separation, serodiagnosis of syphilis, pregnancy and cancer. From November 1927 he worked with Lucie Adelsberger (1895–1971) in the newly established monitoring centre for hypersensitive reactions. Together, they were not only active in building up a body of research work and publications on allergic diseases in the following years, but also extended the “monitoring center”, turning it into a consultation and treatment unit for patients with allergies.

After the Nazis came to power, Hans Munter was dismissed from the RKI in spring 1933 because he was Jewish. This meant he was reliant from then onwards on his work as a doctor of internal medicine (specialising in pulmonary diseases) in his own practice. However, he developed a stomach ulcer and died on 7 February 1935, one week before his 40th birthday, in Berlin’s Franziskus hospital. His non-Jewish wife remarried, thereby guaranteeing that his two children were spared persecution by the Nazis.