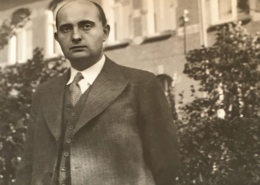 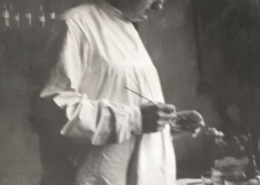 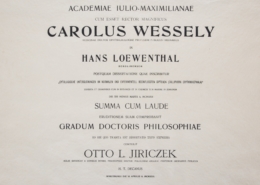 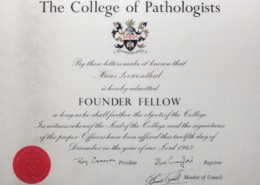 Hans Loewenthal (1899-1986) was born in Berlin, the youngest child of Theodor Loewenthal and Jenny (née Elkan). He had three older sisters. His father was a butcher with his own butcher shop and sausage factory. After Hans Loewenthal received his school-leaving certificate at Easter 1917, he was stationed in Italy as a soldier in the Austrian army at the end of World War I. He then studied medicine and natural sciences at the universities of Berlin and Würzburg. In Würzburg he received his doctorate in zoology in 1922 with an experimental work on blowflies [“Cytological Studies on Normal and Experimentally Influenced Diptera”], and in 1924 he completed his medical studies in Berlin with a dissertation on egg maturation in the sludge worm Tubifex tubifex [“Die Oogenese von Tubifex tubifex (Müll.)”]. Both papers had previously appeared as articles in the Archiv für Zellforschung, a renowned scientific journal.

Hans Loewenthal obtained his first position at the University Institute for Experimental Cell Research, which at that time was still a department at the Institute for Cancer Research of the Charité hospital in Berlin. He later worked in the Bacteriology Department of the Rudolf Virchow Hospital before moving to the Research Institute for Hygiene and Immunology in Berlin-Dahlem, which was headed by Ernst Friedberger (1875–1932), a German immunologist and hygienist of Jewish descent. At the RKI, Loewenthal probably began working in 1928 in the Rabies Prevention Department [Wutschutzabteilung] headed by Josef Koch (1872–1944) and in the following years established a laboratory for cell research. He published several papers in the Journal of Hygiene and Infectious Diseases and the Journal of Cancer Research. Together with RKI President Fred Neufeld (1869– 1945), he wrote a paper on phagocytosis [uptake of extracellular particles, microorganisms, or fluids by specialized cells] for the 13th volume of the “Handbuch der normalen und pathologischen Physiologie” published in 1929.

After his dismissal from the RKI, Hans Loewenthal emigrated to England in the summer of 1933. On the advice and with the support of the Berlin cell

researcher Rhoda Erdmann (1870–1935), he took part in the Third International Congress of Experimental Cytology. He never returned to Germany. On December 8, 1933, he married Ilse Hanna Stenger (1902–2000), also from Berlin, in London. Their two daughters were born in 1935 and 1939. Hans Loewenthal first worked as a fellow at the (Royal) London Hospital and during the war – by then a British citizen – in the Emergency Medical Service. From 1945 he was a senior pathologist at Chase Farm Hospital, north of central London in Enfield. In 1963, he was one of the founding members of the Royal College of Pathologists. Hans Loewenthal died in London shortly after his 87th birthday in December 1986.