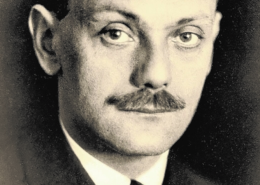 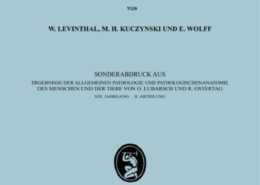 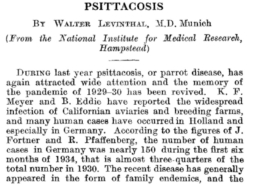 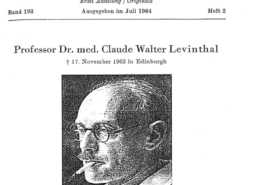 Walter Levinthal (1886-1963) spent his childhood and youth in his native city of Berlin, where in 1904 he passed his school leaving exam. He then began to study medicine at the universities of Berlin, Freiburg and Munich. After passing his state examination in 1909 and completing his medical trainee period he submitted his doctoral thesis in 1912 “On xanthine and caffeine metabolism in the human body” in Munich under Friedrich von Müller (1858–1941), a professor of internal medicine. During the First World War Walter Levinthal worked as head of a laboratory to the advisory hygienist of the German Fourth Army. His name became known among medical experts in 1918 at the latest, after he presented the Levinthal Medium that he had developed and which was later given his name: a specific nutrient medium based on boiled blood and used in the laboratory for the cultivation of certain pathogens.

After the war Walter Levinthal entered the Robert Koch Institute (RKI). At the beginning of 1919 he was given a post as a scheduled assistant. He stood in for a number of years as head of the RKI’s bacteriological investigation office. This included setting and marking examinations at the State School for Disinfectors and giving training courses for medical and technical assistants. Levinthal carried out research into influenza and in 1921 published a book about “The Influenza Pandemic of 1918” together with the bacteriologists Max Kuczynski (1890–1967) and Erich Wolf. In December 1924 he travelled for three months to New York on a scholarship from the Rockefeller Foundation. On 1 April 1928 Levinthal – who had been promoted to senior assistant – joined the staff of RKI Director Fred Neufeld (1869–1945); he later worked for Neufeld’s deputy Friedrich Karl Kleine (1869–1951). In 1931 he was awarded the Paul Ehrlich Prize for discovering the psittacosis bacterium, which causes ornithosis, also known as parrot fever. Alongside his work at the RKI Walter Levinthal was also involved with the German League for Human Rights, editing its magazine “Die Menschenrechte” [The Human Rights] among other things.

On 15 March 1933, as he left his workplace, Walter Levinthal was arrested by a troop of SA and SS men who had marched into the RKI premises, and was held in police custody overnight for allegedly making defeatist remarks. Due to his Jewish descent, he lost his job at the RKI in line with the “Law for the Restoration of the Professional Civil Service”. He then emigrated with his wife to Great Britain, where he was able to continue his research for a short time in London and Bath. Eventually he found employment in Edinburgh at the laboratory of the Royal College of Physicians. He took British citizenship and after the Second World War had his title and pension rights of a retired RKI director and professor reinstated within the framework of a “reparations” agreement. Walter Levinthal died in Edinburgh at the age of 77.