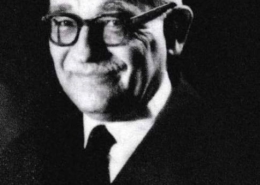 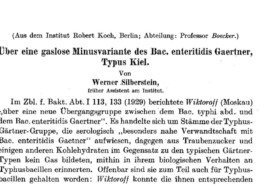 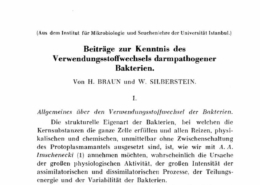 Werner Silberstein (1899-2001) was born in Berlin. He attended the Königliches Wilhelms-Gymnasium, and passed his school-leaving certificate in 1917. After the end of the First World War he studied medicine in his native city, spending a semester in 1921 at the University of Freiburg. In 1924 he submitted his doctoral thesis in Berlin entitled “The rinsing treatment against gastric emptying problems”. The same year he married Ronja Kolodny (1899–1978), who was from White Russia (present-day Belarus).

After working for a while as an assistant doctor at the Charité Second Medical Clinic headed by Friedrich Kraus (1858–1936), Werner Silberstein joined the Robert Koch Institute (RKI) at the beginning of 1926, where his cousin Alfred Cohn (1890–1965) was already employed. In the following seven years he worked principally in the Chemotherapy department. As a bacteriologist he undertook research into various pathogens and published numerous articles in medical journals, including ones about diagnosing typhus and paratyphoid.

Shortly after being dismissed, like all Jewish members of staff, from the RKI, Werner Silberstein, a committed zionist, emigrated with his wife to Palestine. There he initially found work in the bacteriological laboratory of the Rothschild hospital in Jerusalem managed by the Hadassah Medical Organisation. From 1938 to 1942 he worked for the hygienist Hugo Braun (1881–1963), who had also emigrated from Germany, at the Institute of Microbiology and Epidemiology at the University of Istanbul. In 1942 he returned to Palestine. After the founding of the state of Israel in 1948 he was substantially involved in developing central laboratories for the country’s healthcare system. He held high positions in the Israeli health system. As a result of a reparation agreement he was reinstated as a retired professor of the RKI. When he retired he continued to live in Israel. A visit he made to Berlin and to the RKI in 1979 was documented by Thomas Hartwig as part of a documentary film entitled “Begegnung mit der alten Heimat” (encounter with the former homeland). Werner Silberstein died at the age of 101 on 1 February 2001 in Jerusalem, the city which had awarded him honorary citizenship.