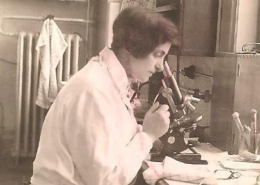 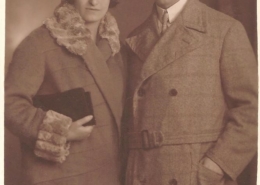 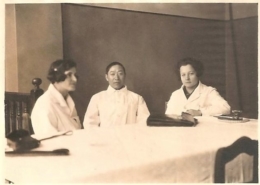 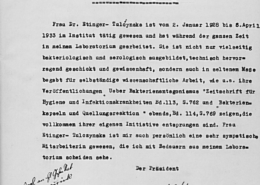 Rochla Etinger-Tulczynska (1902-1990) was born Rochla Tulczynska in Rozany, Poland. Not much is known about her childhood and youth, only that she had four sisters. She came to Germany as a doctor of bacteriology after she had presumably completed her medical studies in Russia. On 19 January 1928, at the age of 25, she married Simcha Etinger (1893–1966), a mathematician from Minsk, in Berlin.

Shortly before her wedding, Rochla Etinger-Tulczynska joined the Robert Koch Institute (RKI). Her first publication on “Variations of Typhoid Bacilli in Cultures with 0rgan Pieces” dates from 1929. In the following years she published several articles, especially in the German Journal of Hygiene and Infectious Diseases [Zeitschrift für Hygiene und Infektionskrankheiten]. She collaborated on two articles on pneumococci with RKI Director Fred Neufeld (1869– 1945), with whom she also gave a joint lecture twice at the Berlin Microbiological Society.

After the National Socialists came to power, Rochla Etinger-Tulczynska had to leave the RKI because of her Jewish descent. At that time, she, who had previously suffered several miscarriages, was heavily pregnant. In April 1933, she and her husband set off for Italy, where their son Hillel (1933–1982) was born in Trieste on 1 June 1933. From there, the family emigrated to Palestine, which was a British mandate territory at the time. Her hope of being able to continue her research in her new homeland was not fulfilled at first. After the founding of the state of Israel, however, she was able to work again as a bacteriologist in the Department of Food Technology at the National and University Institute for Agriculture in Rehovot. She also ran a medical practice and a private laboratory. In the 1950s and 1960s, she repeatedly published articles in international journals. She died in Rehovot on New Year’s Eve 1990 at the age of 88.